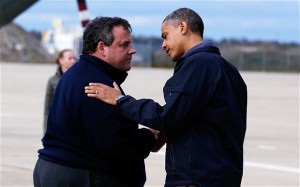 I was watching the news, looking at the destruction and havoc caused by Superstorm Sandy as it swept across the southern states of America; when there he was, President Obama, in his jacket and jeans running down the steps of Airforce One on to the tarmac in New Jersey.

This was not the normal, formal picture of the President; it was not even the image we occasionally see, of him off duty! This was the President showing the world and the American people, that he was in control, and that he was going to lead by example.

The result and the pictures that followed of him comforting ordinary people, said that here is a man showing that he cares, that he is committed to supporting people; that he is leading. The outcome was that even one of his most staunch critics, Chris Christie, Governor of New Jersey, could only look on in admiration and say “It’s really important to have the President of the United States here!”

The quality of our leadership, and the way we conduct ourselves as leaders, is a crucial factor in our ability to engage people; to create that vital emotional attachment to us as their leader and to the organisation we lead.

It’s engagement that motivates and energises people to do things because they want to, rather than to do them because they have to.  To want to give more, do more; go that extra distance. This isn’t rocket science, we all know this, but how often do we really think about our leadership, and the impact it has on those we lead. How often do we ask ourselves,  are our people engaged , motivated and inspired?  As leaders, let’s not forget that it is within our grasp, our responsibility, to do this.

The storm gave America the chance to see Obama being the President, and it looked good, it looked engaging, it looked inspirational.